She an innocent young girl

Them the miscreants weaker than her.

For she lives with her self respect

But they live on borrowed respect.

In dignity she moved around in peace

But they are sick minded, against peace.

A proud student she was once of her college

But they reduced her to a victim state.

Unbeknownst to her, she became their prey

while on an errand to recharge her phone.

The two pounced upon her as the evening matured

Tying up her hands and feet tightly secured.

poured kerosene on her and set her on fire

Marvelling at each other for consequences dire.

It was about 9pm in Bangladesh

When Hell attacked in their form

Phoolan Rani was at fault as per them.

Her Hindu identity in her motherland

Was reason enough to burn the girl.

Does any religion pronounce death

and murder in equal measure at par?

Who gave them the right to carry such act

Why? I ask, Why? Does Bangladesh let it happen

Why do Hindus feel unprotected and forsaken?

That each day a Hindu or two is simply attacked

Fortunate for Phoolan, she survived

but who understands what she sacrificed?

At 22 years of her youth, her life had just begun

When the couple of men, vicious than a gun.

Does their religion give them a clean chit to kill?

Does their conscience so easily forgive them?

And they think they are the brave ones?

They are cowards hiding behind their veil.

Yes, the veil being a vital part of their faith

is proof enough of their cowardly stealth.

This injustice has to be shunned by all

Speak up if you are a human and protect all.

Humanity for some is on its all time low

Their death too shall come even if slow.

How would you like if your hand got burnt?

Or if in an injury you get hurt?

The pain, the screams of this girl are far bigger

than your imagination as her trauma is greater.

Will she ever trust anyone standing next to her?

Will the world just belong to haters and cowards? 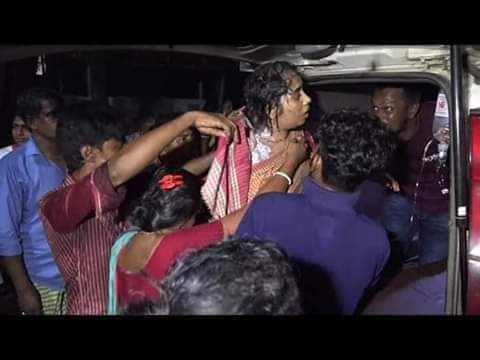