Several visits to orphanages and schools where orphans are studying resulted in this piece of poetry as I tried to place myself in an orphans shoes. I have cried writing this poetry as the emotions of a child who lost his world were too strong and touched my soul. Would love your opinion on this work as we live in a world of ungratefulness where we complain much and fail to acknowledge the bountiful mercies of life.

A rare queasy sentiment!
Emerged from under four chambers Of my heart,
When twisted and somewhat curled I found,
That piece of an old photograph.
Placed prominently in a fresh envelope with my name .
Torn at an end where his finger  would have been,
Slightly washed away from the upper right end,
Mother’s face appeared faded caused by erosion untimely.
Father’s fingers went missing cut off by the rude tear.
I found that rustic gem of a possession,
In the orphanage mother’s last possessions.
In the picture too they protected me, saved me from damage,
As they tore away and faded away.
The parents who now live only in the mind as a fond memory.
When the house caught fire by some freak stove accident,
It killed my joy, my loving angels and my toys.
And I stood alone, as I reached home from
my school in the blue uniform.
Probably she had cooked my meal for me.
Probably he had bought my new shoe for me.
The questions remained unanswered, and  misery and gloom registered
I now look upon this photograph that  was salvaged by someone.
I was smart in this , holding hands of mum and dad at each end.
Years passed and I never knew of this gift,
Neatly hidden away by my orphanage mum.
I got it now as I have grown and she passed on,
Handing over the kids under my empty care.
I was poor till a minute ago but now am rich with memories ,
That came flooding along with this torn photograph.
The patio with the paint pealed off,
And my toy car that would zoom off,
The shelf of books in the living room,
Where God knows how many books Dad would read.
That sewing machine in the angular corner,
where mum would pride, displaying her charismatic creations.
And the bat and ball and carom board,
All gone lost have reflected back,
In a wink so real yet elusive and impossible.
The rare queasy sentiment!
It Leaves me undecided if I am happy now,
Or, was I happier,
Before the treasured find through  my memory lane,
In the visible form of this tattered
But so beautiful,
Torn and worn out old photograph. 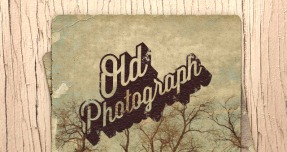 4 thoughts on “The Torn Photograph”