The Lotus Healing Seva Group conducted  a Reiki Camp on 25/8/16 at The Makimei Children’s Home in the slums of Nairobi. The day incidentally was of the Hindu Festival of Janamashtmi – celebration of Lord Krishna’s earthly birthday.

What was amazing was that instead of being hooked on to the rituals connected to the festival ( not that there is anything wrong with rituals) the members actually practiced the teachings of Krishna who had emphasized the importance of one’s duty being above all. During the legendary Battle of Mahabharata Sri Krishna advises Arjuna to carry on with his duty of fighting the war for the just cause and not be influenced with his relationship with the opponents.

What is the duty these ladies carried on as their celebration? Being part of a group of energy healers they have accepted their duty of spreading the joys of Reiki among various segments of society at large by either conducting Reiki Healing Sessions or imparting the training for same as a selfless form of service.

Each time I get the opportunity to do such a Seva (selfless service) I encounter a very gratifying experience within myself. This seva at Makimei was a very fulfilling one too. I have expressed some of it as a poetry below. Looking at the infants lying around in a room was very soul searching for me. I thought of how much we have in life, and yet we are the most unsatisfied lot of grown ups. These little ones, were quiet to the extent to be mistaken as being asleep. At a closer look we noticed they were awake. 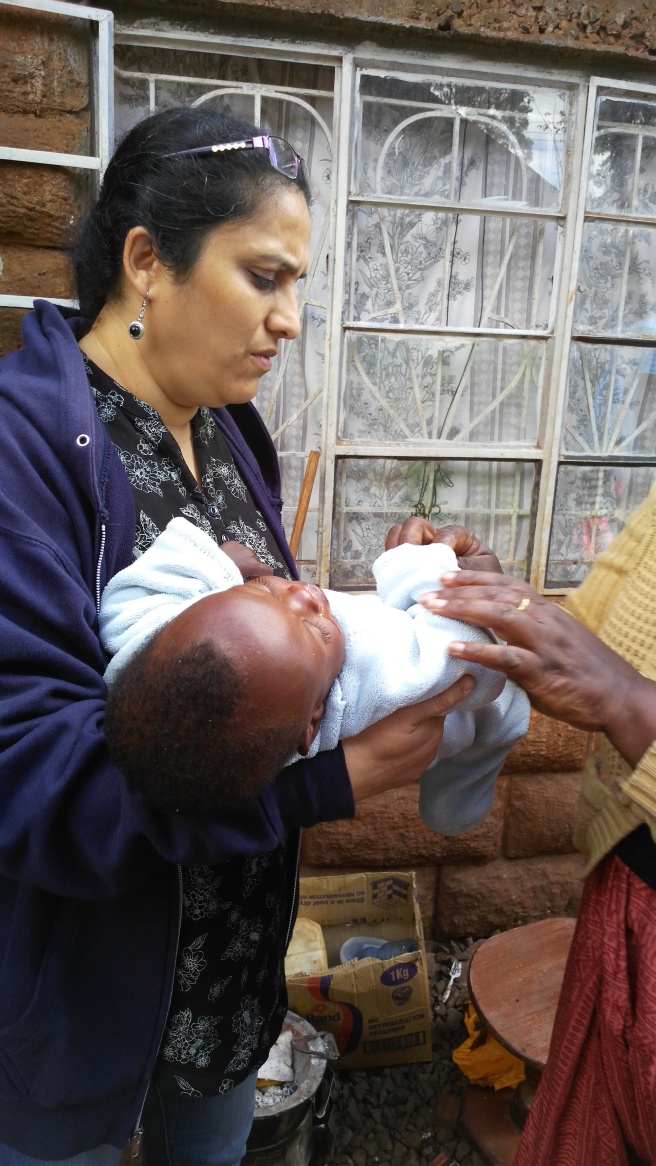 Nidhi, who is a regular voluntary counsellor at this home said that these kids were usually quiet as they hadn’t known the luxury of being pampered or being attended to more than required. That was a revelation. We usually pamper and shower our best upon our children to the extent of spoiling them and here were these children who were satisfied at being fed. Their forlorn looks were so due to their ignorance of the joys of being pleased at each step. These little bundles of joy had not known to be coaxed to laugh the childish giggle that warms up many of the parenting hearts.

21 children got trained to Reiki that day. It was interesting to observe how the things which attract us are a mere life stance for them.  As Punita taught the children and Grace guided them with the positioning of hands I noticed a small cat moving around in the open tent. Perhaps the cat wanted some Reiki I thought to myself a bit amused. It went under a chair and came out from under another one moving over the feet of the young boys, our students. It didn’t bother these boys that the cat was moving around in the tent. They were so matter of fact about it. Then a tawny lean dog came in too with his slight limp. He wasn’t following the cat, he was just simply being there. This was life in it’s true essence for these children who were living together in harmony with these dog and cat mates without a fuss. And we, the privileged lot, take them as pets. We cuddle them, give them the luxurious life style as ourselves, and then portray that as being human. I sense different nature of humanness in different situations.

Another humane touch became so evident when some very young children due to the scorching heat were tired and sleepy. In their slumbery mood their hand posture would go wrong sometimes. The older children were very quick to guide the younger ones. They were not mere students, they behaved as gaurdians of the younger ones in the class. Mama Margaret the founder of the home had definitely ensured a valuable upbringing towards those fell under her care.

Heart touching their silence
Became our LHSG observation
As we entered the Makimai Home
And the place to us was shown
Infants, babies so very little
Covered cosy in warm blankets
All scattered around in a room
On the bed, the couch and even
On the floor
As we made way through the door
Missing were the rocking cradles
Or the luxuries of my childhood
I wondered whose little kids were these
And how could their mothers be at peace
Having left them alone to survive
Causing their motherhood a deprive
Were they cruel, were they unjust?
Were they dead or bowed to painful thrust?
Mama Margaret became their mum and dad
Be it a little girl or a young lad
Nurtured in her calming care
With running noses they stare
Silently gaping from the lap or their chair
Happiness comes to them with a dare
As we move ahead to the tent
Obedience displays with no dent
The students big and small gather all
Pulling chairs and lining up them all
To the unwalled tented walls
21 of them to be precise
They seated themselves with unseen pride
Of singing praises in prayer form
Poverty to them is not a storm
With cheerful faces full of life
Their energy immense knew no strife
Quick to learn, so very smart
God gifted is their craft and art
Being educated to the healing Reiki
By Punita with a disciplined making
Their grasping ability very vast
Calculating healing time, not moving fast
And did I mention that we didn’t observe
The very auspicious Janamashtmi fast
Observing the Birth Anniversary of Krishna
Him being our Hindu Divine Lord
Grace, Punita, Nidhi and I,Monica
Observed this pious divine day
By worshiping Krishna in a new form
His African Form of little kids
Who are divine in their Kenyan spirit
Purity of heart and thought
In their eyes we have caught
The true celebration of a festival
Is this joy of making it a Reiki-Val
And watching with delight the children
Practicing Healing on themselves
And their friendly partners
Some little imps playing pranks
Others silently giving thanks
Learning the attitude of gratitude
With healing that has no substitute
Mark and Henry the older boys
Correcting and guiding younger girls and boys
The positioning of hands appropriate
At the chakras back and front
The meridians too with hands so warm
The healers and the healees with charm
Giving and receiving the Reiki gift
Enjoying burgers, cakes and milk
Playing football in their break
Oozing with energy
So very real, not a fake
They chirped like birds at some lake
Yet serious lessons they did take
Some so young got tired
They wished to sleep, on chairs retired
The day so relaxing needed more break
As the warm sun broke into a heat spell
They needed to quench the parching throats
In the tent so ventilated yet hot
A drink of water midway was required
Satiated they quietly then returned
Back in action to practice the art
Of newly learnt Reiki craft. 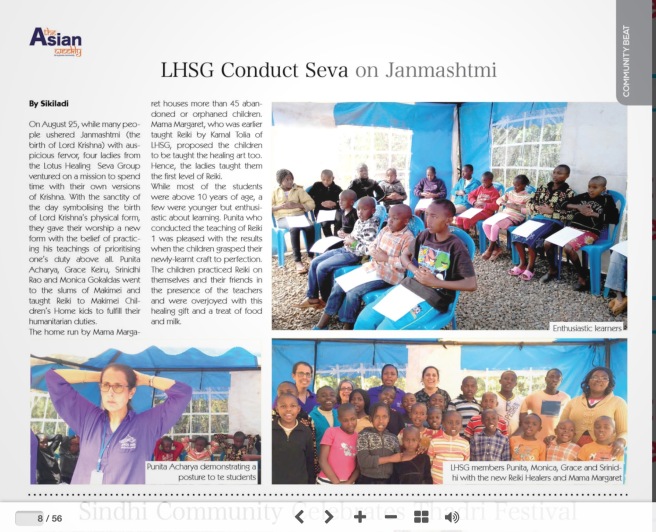 Information about the Centre:

[27/08 20:40] Srinidhi Rao: HISTORY
The centre was started in the year 2006 with two children from the local community whose parents had succumbed to the HIV/AIDS scourge.. They were being hosted in the director,s home through her good will and drive to alleviate human suffering.
The homeStarted in Githogoiyo village, Kamahindu sub-location,Kambaa location, Lari District in the larger Kiambu county. Due to insecurity the home shifted to Kanyariri village Gitaru location,Kikuyu division in Kiambu county in september 2010.The centre later moved to Rukubi area then to Gakoe area in Gitaru and lastly to the current premises. In every facility the centre has moved from, the landlords have been demanding to have their facilities back.
KEY CHALLENGES
Lack of permanent residence – the home is currently on rental premises premises but has no room for expansion.
Lack of enough personnel. There are no permanent workers, we mostly depend on volunt
eers.
Lack of sustainable sponsorship programme.
The current residence is unable to accomodate the increasing number of children received everyday.
Schoolfees for the children and transport.
The need for infant formular ( NAN 1,2,3 ) for the growing number of infants.
The need for daipers and wet wipes for the growing number of infants.
The need to pay for medical expenses for challenged children which are way too expensive for the centre to manage.

One thought on “A Unique Janamashtmi”