I ,Monica went on my first ever Seva oriented trip to India in February. The opportunity had come forth as I read a mail from Indusind Foundation ref a Ruh Rihan ( meeting in person and communicating for ones upliftment) with the Sindhi Widows. Although they suggested for this in a number of cities in India, I felt more inclined towards Mumbai or Bangalore.

Kamal was going to the holy city of Vrindavan to go and do a similar Seva for the widows at various Widhwa Ashrams. I decided to be part of this Seva as well so reached Mumbai in Mid February. Together we left for Vrindavan via New Delhi.

We went to three ashrams in Vrindavan where we did the Seva. Our friend Anuradha Nath had also joined us for the sevas in Vrindavan. The first day Anuradha taught Reiki to the Bengali widows at the Maitri Ghai Widhwa Ashram. Then we inaugurated the Water Treatment Plant that we had donated to the ashram.

The nest day Anuradha again conducted the teaching in Bengali at the Maitri Ghai Widhwa Ashram at Radha Kund. As she taught Kamal and I started giving reiki Healing to some of the very old women. That day was ekadashi – an auspicious day of the month when all the widows were fasting. They were served half a litre of milk and 1 kg of fruits as their mid day meal.

We gave out sarees, petticoats and blouses for the widows and left satisfied after having taught them.

The next day another opportunity came forth when we got to visit Ma Dham Ashram run by Mrs. Mohini Giri. This Ashram was residence to widows and abandoned women belonging to various regions. We decided to focus on giving Reiki Healing but came across interested management team who wanted to learn reiki. Kamal started to teach five members of staff while Anuradha and I, Monica gave hands on Healing to the widows, heard their sad stories, gave them hugs and spoke comforting words. Their tears touched our hearts as they spoke about how and why they landed up in these ashrams despite having their children and families. 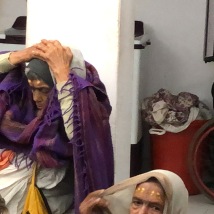 Once we reached Mumbai it was a different scene. The Sindhi Widows that we were to meet weren’t in any Ashram. They lived separately in their individual houses but had little or no means of sustenance. Various Sindhi charitable organizations have been trying to provide support to the several widows in various suburbs of Mumbai and throughout other Indian cities.

Kamal and I went to Mahadev Mandir Trust in Thane suburb where we were introduced to the management of the trust and members of Indusind Foundation. Then we footed our trip in the glaring hot sun to visit over a dozen widows in their houses. This survey gave us a first hand glimpse into their standard of living, their hardships and woes. Once again we became privy to their sad stories which brought about a big shift within me.

The next day we reached the Sahiti Bradari Mandal Banquet Hall where we were to conduct Reiki Training for widows coming from Thane and Mulund suburbs. We met the management teams of Sindhi Council of India, Sahiti Bradari Mandal , Sindhi Sajjan Television and Indusind Foundation. After having done some video recordings both Kamal and I, Monica started off on our mission.

We conducted the camp in Hindi as well as Sindhi and I must say it made me feel very good teaching in Sindhi language as it is my mother tongue. I am a proud Sindhi and the fact that I had the opportunity to a Seva for other sindhis in my language was a God sent privilege. We taught Reiki to widows as well the  officials of the various organizations mentioned above and some of their family members.

I strongly believe that when one plans for service to any good cause, God ensures your success at that in various blessed ways. When Kamal and I planned the trip we knew we will incur personal expenses but we also wondered if we could gather enough funds to help the various widows we meet with their requirements.  Bhagwan, Ishwar, God call him by any name was with us throughout the “Widhwa Project”. Our well wishers who were informed of our Seva intentions came forward with enough funds to help us give out cash handouts, bags of flour, sugar, tea to 50 widows in Mumbai, sarees sets, water treatment plant, cash for purchase of water heaters, refrigerators and inventor in Vrindavan ashrams.

Flanked by a Hindu and a Muslim widow at Ma Dham

2 thoughts on “The Widows I met in India”